Place to talk while we get our act together.

When I was a kid, other kids admired singers, actors, people who played silly games with little balls, etc.

Being a tad different and with a rather not so usual background, to say the least, one of the men I admired as a kid was a man named Mike Hoare. Most kids my age didn't even know who he was. 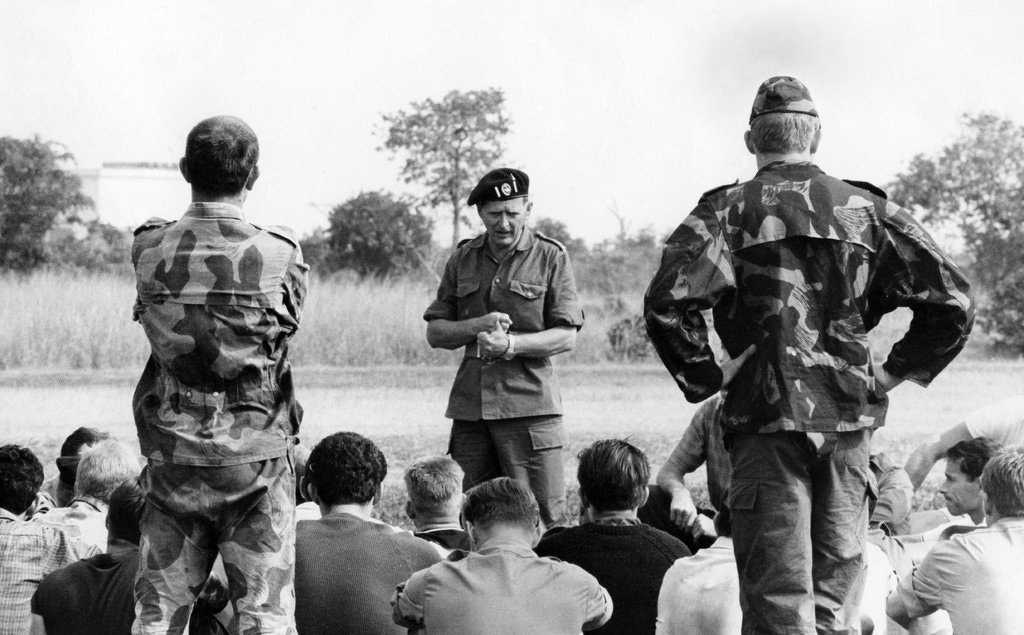 “Mad Mike” Hoare, in his trademark black beret, training mercenaries in Katanga province in 1964. The Richard Burton character in the movie “The Wild Geese” was modeled on Mr. Hoare.

Mike Hoare, an Irish soldier of fortune who led white mercenary forces in civil wars in Congo in the 1960s and a ragtag band of commandos in a farcical aborted coup in the Seychelles in 1981, died on Sunday in Durban, South Africa. He was 100.

His son Chris confirmed the death, in a nursing home.

Mr. Hoare crossed seas on a sailboat and Africa (south to north) on a motorcycle. He searched for the fabled lost city of the Kalahari and retraced the steps of Victorian explorers to the sources of the Nile. He fought the Japanese in Burma in World War II, rescued hostages from rebel forces in Congo, found nuns and priests hacked to death in the bush and was imprisoned in South Africa for hijacking an airliner.

The exploits of Mr. Hoare, who was called “Mad Mike” for his recklessness under fire, were recounted in books by him and others, in a film starring Richard Burton, and in sheaves of foreign correspondents’ dispatches, now faded yellow in old newspaper morgues with datelines from far-off places.

Tiring of life as an explorer and safari guide, Mr. Hoare first hired out as a mercenary in 1960-61, leading a European force fighting for Moise Tshombe, whose Katanga province was trying to break away from the newly independent Republic of Congo.

His mercenaries, while paid to fight, were largely motivated by anti-communism and lust for adventure, crushing larger, less well-armed Congolese forces and sometimes saving civilians from massacres.

But news correspondents covering the mercenaries said some were racists who killed with gusto. Indeed, these soldiers of fortune were largely undisciplined, sometimes looting towns and killing indiscriminately — clearly war crimes, the correspondents said.

By his account, Mr. Hoare did not condone such atrocities but, vastly outnumbered by his out-of-control forces, he had been powerless to stop the carnage, though he claimed to have once shot off the big toes of a man as he was assaulting a woman.

In soldiering, one volunteer is worth 10 draftees, Mr. Hoare liked to say. “In a good mercenary outfit they’re all there because they want to be,” he told David Balfour for a “Frontline” documentary on PBS. “The motive may be the high money they earn, but they all want to do it. And the fact that they’re all volunteers means you can train and motivate them at tremendous speed.”

Katanga’s secession failed. But in the chaos of killings and regional revolts that followed independence from Belgium, Congo faced a new crisis in 1964 when rebels — warrior-soldiers called “Simbas,” Swahili for “Lions,” backed by Cuban and Chinese Communist advisers — rebelled against the central government in Léopoldville, which by then was led by Mr. Tshombe, and seized half the country. The Cuban revolutionary Che Guevara joined his countrymen fighting in Congo in 1965.

Mr. Tshombe again hired Mr. Hoare, who recruited and trained 500 German, Italian, Greek, Belgian, Rhodesian and South African mercenaries, each paid $364 to $1,100 a month, to lead Congolese forces against the rebels. Emerging on the world stage in news reports for the first time, Mr. Hoare — or Colonel Hoare, as he called himself, replete in his black beret, military khakis and a cravat at his throat — drove the Simbas back to Stanleyville, their capital.

As the mercenaries closed in, fears mounted for thousands of Europeans trapped in the city. Belgian paratroopers were flown in, and most of the Europeans were rescued by the Belgians and Mr. Hoare’s forces. But the troops also found scores of hostages massacred, including nuns hacked to death and priests with throats cut.

Returning home to South Africa, he wrote accounts of his exploits, including “Congo Mercenary” (1967), and worked as an accountant. He was also a technical adviser for “The Wild Geese,” a 1978 British film about mercenaries in Africa. The Richard Burton lead was modeled on Mr. Hoare, and the film’s title was taken from a 17th-century Irish mercenary army that Mr. Hoare paid tribute to with a shoulder patch he wore depicting wild geese.

In 1981, when he was 62, Mr. Hoare again made headlines, leading a gaggle of over-the-hill mercenaries from South Africa, Zimbabwe and several European nations in a bizarre attempt to overthrow the Socialist government of the Seychelles, an Indian Ocean island republic.

Apparently with Pretoria’s connivance, they flew to the Seychelles posing as rugby players and members of a beer-drinking club, the Ancient Order of Foam Blowers, carrying equipment bags with false bottoms hiding weapons and walkie-talkies. But a customs agent spotted a gun muzzle and a firefight erupted.

His exploits included retracing the steps of Victorian explorers who found the sources of the Nile, fighting the Japanese in Burma and leading an ill-fated coup attempt in the Seychelles.

After hours of combat, 44 mercenaries escaped by hijacking an Air India jet on the tarmac. They flew to South Africa, where most, including Mr. Hoare, were tried and convicted of air piracy. The affair had none of the glamour of his earlier exploits. A judge called it “a farce,” and sentenced him to 10 years in prison. He was released three years later under an amnesty for aging inmates.

Thomas Michael Bernard Hoare was born on March 17, 1919, to Thomas and Aileen Hoare, in Calcutta, India, where his seafaring father was an assistant dock master.

After early years in India and Ireland, Mr. Hoare attended schools in England, joined the British Army in 1939, became a small-arms expert, passed officers’ candidate school and rose in the commissioned ranks.

In World War II, he fought the Japanese in the Arakan region of Burma with the Long Range Penetration Group, the British India special forces known as the Chindits, under Brigadier Bernard Fergusson. The Chindits struck behind enemy lines and helped demonstrate the effectiveness of guerrilla warfare.

In 1945, Mr. Hoare married Elizabeth Stott in New Delhi. They had two sons, Chris and Tim, and a daughter, Geraldine, and were divorced in 1960. In 1961, he married Phyllis Sims in Durban, South Africa. They had two sons, Michael Jeremy and Simon. In addition to Chris Hoare, the four other children survive their father.

Mr. Hoare mustered out of the army as a major after the war. In London, he became an accountant, but finding it boring he emigrated to South Africa in 1948. For several years he took tourists on hunting safaris, then began exploring the continent more extensively.

In the 1950s, he rode a motorcycle from Cape Town to Cairo, followed the Nile to its Blue and White tributary sources and searched for the Lost City of the Kalahari Desert in Botswana. If the city exists, its locale remains one of the world’s unsolved mysteries. He recounted many of his travels in “Mike Hoare’s Adventures in Africa” (2010).

Mr. Hoare moved to France in 1992, living for 14 years in the Languedoc area and for three years in Doussard, near Annecy, in eastern France. He returned to South Africa in 2009 and lived in Durban and Cape Town.

His son Chris wrote a laudatory biography, “Mad Mike Hoare: The Legend” (2018), exploring the adventures of a man he called an officer and a gentleman, “with a bit of pirate thrown in.”
Top

I remember reading about him when young. He was quite the character.
Top
Post Reply
2 posts • Page 1 of 1